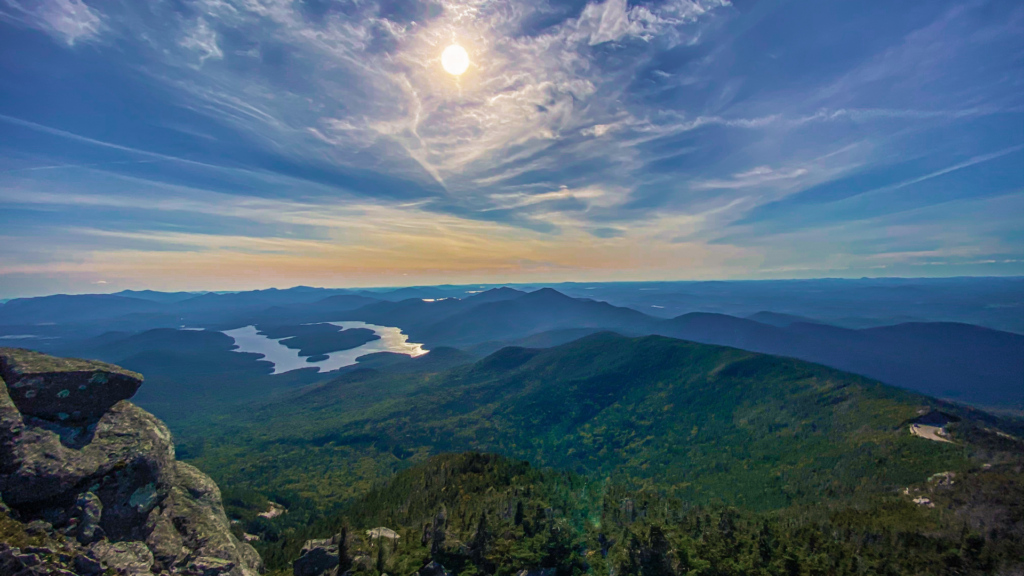 While the Rocky Mountain range is undoubtedly popular among hikers and lovers of the great outdoors, this article is for anyone that wants to try their hand at exploring mountains along the east coast! Albeit not a part of the same mountain system, these parks and trails will bring you to some breathtaking views, and the road trip route leaves a lot of room for fun off-trail exploration! We hope that this mini-guide to the highest peak in each state and province helps inspire your next hiking trip!

First stop—the big apple! The tallest mountain in this state is Mount Marcy. With an elevation of approximately 1628.8 meters, the peak offers incredible views of the Adirondacks. Hikers can trek to the summit via the Van Hoevenberg trail, which is mapped out along a 26.9-kilometre out-and-back route. The trail passes a swimming hole, waterfalls and the Marcy Dam. While slightly out of the way, the Adams fire tower on mount Adams is also a worthy pit-stop for beautiful scenery.

Travelling farther east, we enter the land of the green mountain state—a landscape that lives up to its name. While the hiking route options are endless here, the tallest summit peaks at around 1339.596 meters on Mount Mansfield. While it is possible to take a toll road up the majority of the mountain and spend the day hiking trails from the ridge, carving out the entire day to hike up from the base is truly worthwhile. The 12.4-kilometre loop trail near Underhill is a popular contender here, and while hiking along the ridge from the Nose to the Chin is a must, the view from the Sunset Ridge trail is something you won’t want to miss.

Venturing closer to the White Mountain National Forest, we find the highest peak in New Hampshire. Coming in at 1916.6 meters, Mount Washington’s summit is the tallest climb on the road trip thus far. A slew of trails mapped at varying lengths, altitudes and intensities can be found on All Trails for this mountain. What’s more, if the trail inspires you to spend a few extra days in New Hampshire, Mount Jefferson, Mount Adams and Mount Lafayette are also challenging and rewarding hikes.

Heading northeast to Maine, travellers can take a day to cross the border into Quebec for Mount Gosford. This isn’t the highest peak in the province, but the mountain sits near the border between Maine and Quebec and doesn’t require a considerable detour. This small re-route may also provide a bit of needed respite for hikers, as the mountain is less demanding than some of the other ones outlined for this road trip. The peak reaches 1,193 meters and the moderate-level “Mount Gosford via Frontiere” trail will also take hikers along the Maine border.

The highest peak in this state also doubles as the last checkpoint of the famous Appalachian trail. Measuring approximately 1,606 meters, Mount Katahdin is a source of great catharsis for those that have been following the Appalachian route. However, scaling this humbling mountain on its own is an adventure in its own right—and should be included in any east-coast hiking quest! The 20.6-kilometer Mount Katahdin and Hamlin Peak Loop near Stacyville is a popular route. For a less demanding adventure, exploring Acadia National Park is also a fantastic way to immerse yourself in Maine’s natural landscape.

Crossing the border once more, we arrive in New Brunswick! Although the province isn’t known for its mountainous terrain, Mount Carleton has a beautiful summit, peaking at 817 meters. This is the province’s highest point, and while it may be smaller than the other mountains outlined above, the views are grand. It truly is a sight to see.

Lastly, coming back into Quebec, the Jacques-Cartier mountain is the province’s second highest peak—measuring up to 1,286 meters. Driving the 132 along the Saint Lawrence river will also bring you to another peak on Mount Logan. The highest peak in Quebec is shared with Newfoundland: Mount D’Iberville (also known as Mount Caubvick).