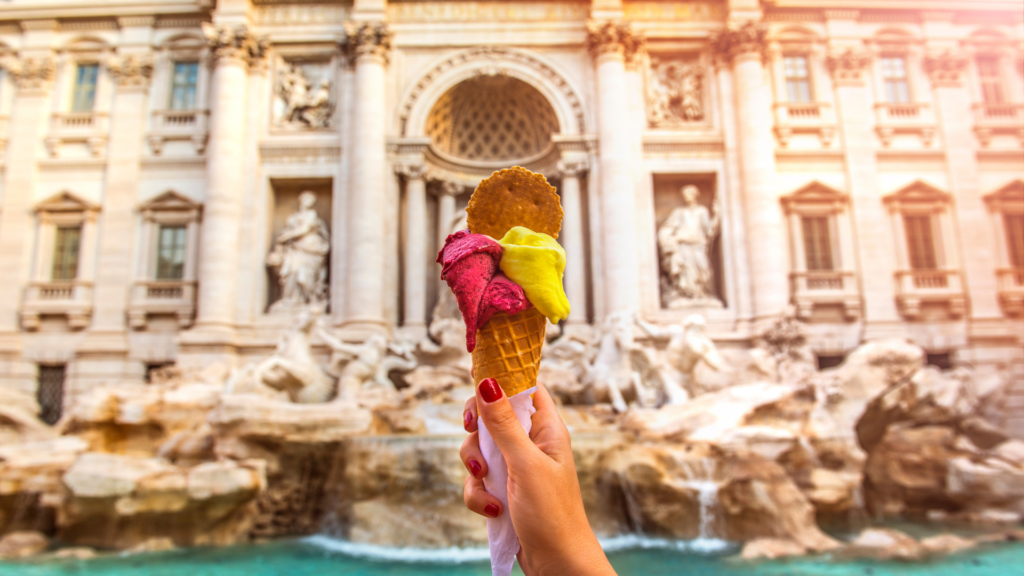 How to Identify Authentic Gelato in Italy

It’s a cliché for a reason, but visiting Italy without indulging in authentic gelato feels criminal. With gelaterias stationed in every neighbourhood, it’s impossible to resist! Especially in the summer heat, locals and tourists alike can be seen enjoying this iconic delicacy during all hours of the day. With that being said, since the terms ‘artisanal’, ‘authentic’ and ‘gelato’ aren’t regulated in Italy, it can be difficult for tourists to differentiate true gelato from other imitations. Luckily, we have assembled a few tips on how to spot the real deal in Italy!

One main element that distinguishes gelato from regular run-of-the-mill ice cream is the fact that much less fat is used in the creation of gelato. It is also churned at a significantly slower speed, thus reducing the amount of air that gets in. As a general rule, this is why gelato has a denser texture with more intense flavor profiles. In other words, gelato should be flavourful and dense—never light and fluffy. Gelato is also served at a slightly higher temperature than regular ice cream which impacts the flavor, and usually requires more specific temperature control.

Moreover, when it comes to gelato… height does matter! Tourists should be weary of gelaterias that have their gelato piled up high in fancy wave-like formations. When gelato is piled this high and still doesn’t melt, this is an indicator that it contains high levels of emulsifiers and vegetable fats. Lastly, if the gelato appears to be shiny, this can mean that it has been made with too many sugars, or that it is old and has oxidized.

While our eyes are naturally drawn to bright and beautiful colours, we must refrain from succumbing to their influence in a gelato shop! In gelaterias, bright and bold colours are usually a sign that the gelato is not wholly natural and authentic. High quality gelato is meant to be made with as many natural ingredients as possible, which usually results in little-to-no extra colouring. Thus, finding gelaterias with natural and muted colours is usually a good indicator that you are being served authentic gelato!

Gelaterias that cater to tourists’ with traditionally western “ice cream” flavours can also be questioned. If a shop serves fruit flavoured gelato when the fruit is not in season, this is also a sign that they are probably not using fresh ingredients. In an authentic italian gelato shop, you won’t see fruit flavours that aren’t also being sold at local markets.

The containers that the gelato is stored in can also hint at the dessert’s quality level! For example, if you see that the gelato is stored in large plastic bins, run the other way! Authentic gelato will be served in flat metal tins, and usually covered with a lid. This is done to preserve the right temperature and attests to the fact that the business does not need to rely on using flashy colors to attract locals. Additionally, due to the fact that the texture of high quality gelato is a lot more dense, vendors will usually use flat metal spades to serve the gelato, rather than rounded ice cream scoops.

Those seeking the full gelato experience, should consider visiting Florence during their stay in Italy! Seeing as how Florence is the birthplace of gelato, it is home to many of the country’s best gelaterias! While there is no shortage of shops to choose from, the Gelateria La Carraia has made a name for itself as one of the best gelaterias in the world.

Lastly, for those visiting Modena, locals swear by pouring a few drops of decadent, authentic balsamic vinegar over your gelato!

Book your next trip with http://flighthub.com to taste all the gelato your heart desires!